OK, BUT fist of all, what does ‘bits and bobs‘ mean? It is a (mostly) British English expression that means “a lot of small things”.

Is it a commonly used expression? If you are curious enough you can read this post about it on the Not one-off British-isms blog. Or you can just look at the two Google Ngram plots below: the first is my updated version of the one in the post, comparing the usage of the expression in British vs. US English; the second is a comparison of its British English to that of the more familiar “bits and pieces” (not exactly the same according to the author of the blog, but the Cambridge Dictionary seems to contradict the claim).

I’ve chosen this title because I wanted to distill, in one spot, some of the best collective bits of Machine Learning that came out during, and in the wake of the 2016 SEG Machine Learning contest, including:

I will touch on a lot of topics but I hope that – in spite of the title’s pointing to a random assortment of things –  what I will have created in the end is a cohesive blog narrative and a complete, mature Machine Learning pipeline in a Python notebook.

Although I have more limited time these days, compared to 2016,  I am very excited to be participating in the 2020 FORCE Machine Predicted Lithology challenge. Most new work and blog posts will be about this new contest instead of the 2016 one.

Some background on the 2016 ML contest

The goal of the SEG contest was for teams to train a machine learning algorithm to predict rock facies from well log data. Below is the (slightly modified) description of the data form the original notebook by Brendon Hall:

The data is originally from a class exercise from The University of Kansas on Neural Networks and Fuzzy Systems. This exercise is based on a consortium project to use machine learning techniques to create a reservoir model of the largest gas fields in North America, the Hugoton and Panoma Fields. For more info on the origin of the data, see Bohling and Dubois (2003) and Dubois et al. (2007).

The seven predictor variables are:

The nine discrete facies (classes of rocks) are: 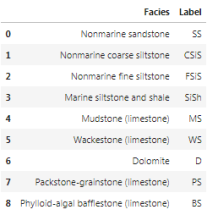 Tentative topics for this series

List of previous works (comprehensive, to the best of my knowledge)

In each post I will make a point to explicitly reference whether a particular bit (or a bob) comes from a submitted notebook by a team, a previously unpublished notebook of mine, a blog post, or a paper.

However, I’ve also compiled below a list of all the published works, for those that may be interested.

The contest’s original article published by Brendon Hall on The Leading Edge, and the accompanying notebook

The Github repo with all teams’ submissions.

Abstract for a talk at the 2019 CSEG / CSPG Calgary Geoconvention

One response to “Geoscience Machine Learning bits and bobs – introduction”