I got this idea of making a modern (no, I am NOT kidding) educational tool to interactively construct and study Ricker wavelets after reading William Ashcroft’s A Petroleum Geologist’s Guide to Seismic Reflection. The book is a gem, in my opinion (I discovered it thanks to a blog post by Matt Hall a couple of years ago) and comes with some interesting tools on a DVD, which are unfortunately a bit outdated. So I went back to my old Geophysics Bible (Yilmaz’ book Seismic Data Analysis), and mashed a few ideas up; you can Download the Excel file here. Please feel free to use it, peruse it, and abuse it, in your classes, labs, nightmares, etcetera…

The tool is fairly simple. In Sheet 1 the user enters the dominant frequency of the desired Ricker wavelet, as shown in the middle of Figure 1. From that informatin the wavelet is constructed using the equation A = g^2 * 1/exp g^2 where g is the ration between frequency f  (in increments of 5 Hz up to an arbitrary 125 Hz – but this could be easily changed!) and the dominant frequency f1 just entered.  frequencies. The frequency spectrum of the wavelet is shown as a graph.

In Figure 2 I show the same Sheet, but for a wavelet of dominant frequency equal to 50 Hz. 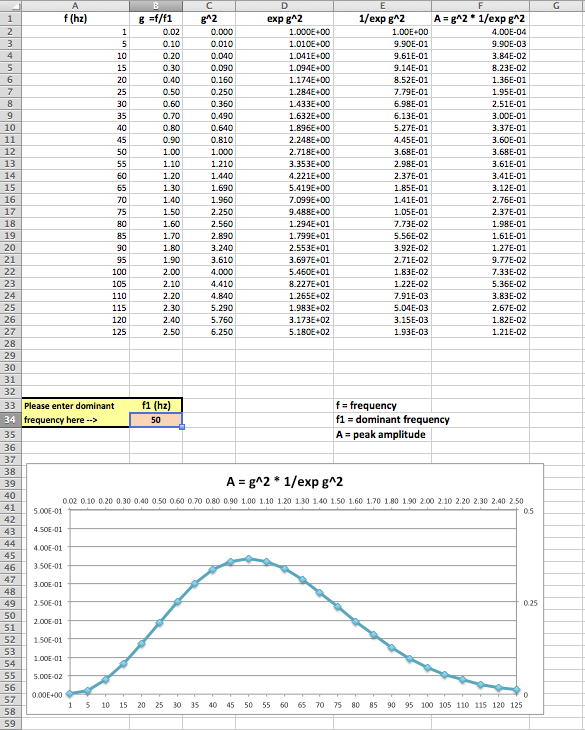 A number of ancillary graphs, shown in Figure 3, display individual building blocks of the formula A = g^2 * 1/exp g^2.

In Sheet 2 the user can view a plot of the wavelet in the time domain,  add Constant phase shifts and Linear phase shifts, and experiment with different combinations of them, as shown in Figures 4-7, below.

Finally, Sheet 3 displays a plot of the wavelet, and of the individual frequency components that make it up. Have fun!!! 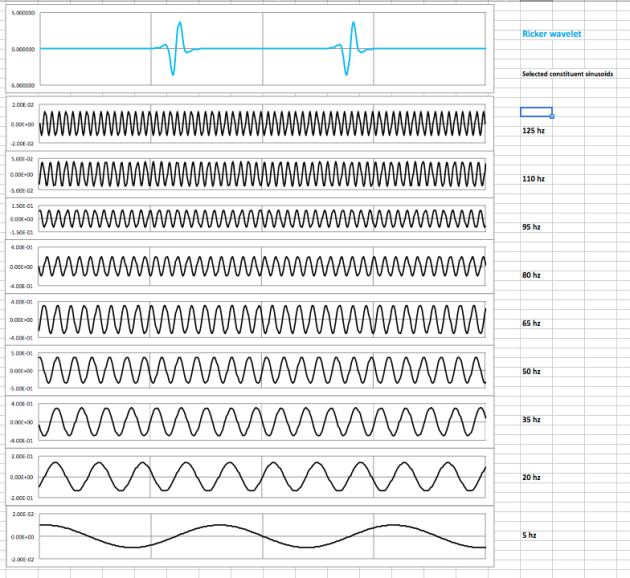 To plot a wavelet [in Python]. blog post by Evan Bianco.

Get new posts via feed