I was thrilled this week to learn from Ryan Boller that his team at NASA’s ESDIS Project included MyCarta’s perceptual rainbow (the CubicYF) as one of the palettes for the Worldview satellite imagery browser.

If you’d like to try it, once on the viewer you can load an overlay and then you can choose from among several color palettes. The perceptual rainbow palette is listed here as “Rainbow 2”.

I am including below an example using the Land surface temperature for April 13 2013 from MODIS Aqua mission: 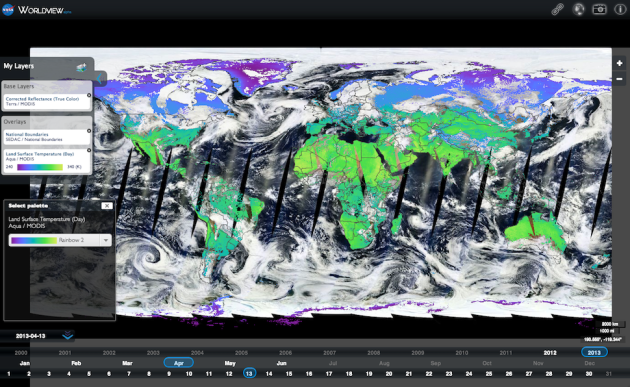 This is really exciting news as NASA’s adoption will increase the palette’s exposure and its chances of becoming more mainstream. This is also as close as I will ever get to realizing my childhood dream of becoming an astronaut. Thanks ESDIS, and thanks Ryan, on both accounts.