In a previous post I introduced ImageJ, a very powerful open source  image processing software. ImageJ allows users to display, edit, analyze, process, and filter images, and its capabilities are greatly increased by hundreds of plugins.

In a future post I will be showing how to use the watershed transform in ImageJ for medical image analysis and advanced geoscience map interpretation and terrain analysis.

Today I am posting a submission entry by guest Ron DeSpain, an image and signal analysis software developer. Ron’s note is about Feature Detection for Fingerprint Matching in ImageJ. I was thrilled to receive this submission as I really have a soft spot for Forensic science. Additionally, it is a nice way to introduce skeletonization, which I will be using in a future series on automatic detection of lineaments in geophysical maps. So, thanks Ron!

Please check this page for reference on fingerprint terminology. And if you are interested in the topic and would like to start a discussion, or make a suggestion,  please use the comment section below. You can also contact Ron directly at ron_despain@hotmail.com if you want to enquire about the code.

A common fingerprint pre-processing method called the crossings algorithm is used to extract from a fingerprint features called minutiae.  Minutiae are located at the end of fingerprint ridges and where the ridges split (bifurcations) as shown in Figure 1.  Once detected, minutiae are correlated with a database of known fingerprint minutiae sets.  This article discusses the very first step in detecting these minutiae in a fingerprint. 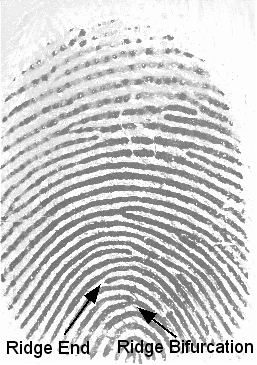 This fingerprint is available in a free database of fingerprint images at http://bias.csr.unibo.it/fvc2000/download.asp

I got the idea for this convolution based minutiae extractor from a paper similar to Afsar et al. [reference] where a slightly different counting scheme is used to identify minutiae.

This algorithm depends on the fact that the end and bifurcation patterns have unique numbers of crossings in a 3×3 local region, as depicted in Figure 2.  This means that by simply counting the crossings you could detect the minutiae. 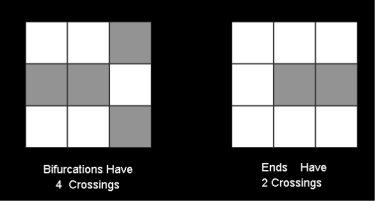 The pseudocode for this algorithm is as follows:

The following imageJ macro will identify minutiae using this simple pattern recognition technique.  You can download and install ImageJ free from http://imagej.nih.gov/ij/download.html.  Don’t forget to get the user’s manual and macro coding guide from this site if you want to modify my macro.

Copy this code to a text file (.txt), drop it into the ImageJ macros folder, install and run it in ImageJ using the image at the end of this article.

The output of the above macro is shown in Figure 3 below: 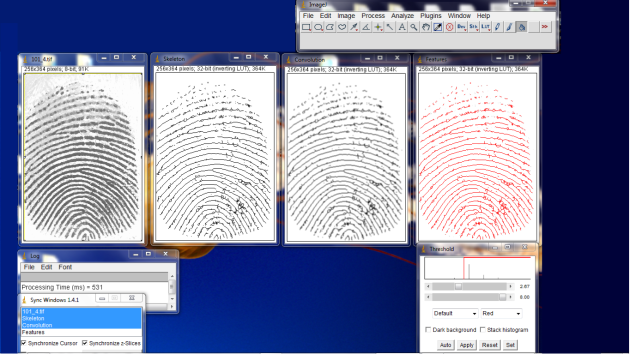 Setting the threshold control to show pixels with a value of 2 in red highlights will show the ridge end detections as shown in Figure 4.   Note that the noise in the image produces false detections, which have to be identified with further processing not addressed here. 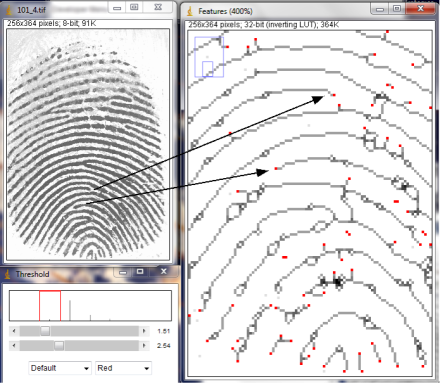 Bifurcations are similarly found by setting the threshold to 4 as shown in Figure 5: 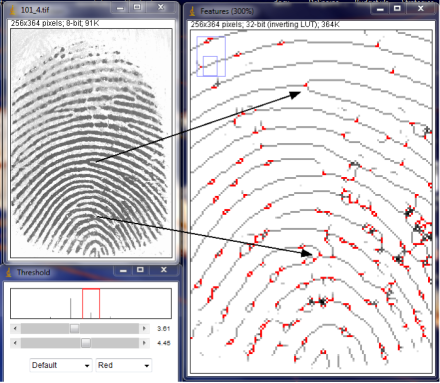 There are two fingerprint processing macros on the Mathworks user community file exchange for Matlab users and free fingerprint verification SDK at http://www.neurotechnology.com/free-fingerprint-verification-sdk.html  for those of you who would like to dig deeper into this subject.

You can copy and save the fingerprint image I used in this article directly from this document’s Figure 6 to get you started either via screen capture, or right-click the image download. 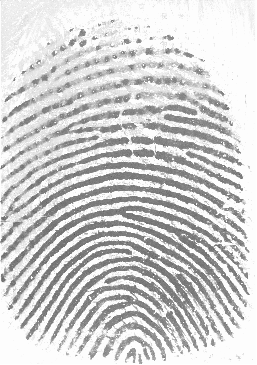 5 responses to “An example of Forensic Image Processing in ImageJ”

Get new posts via feed